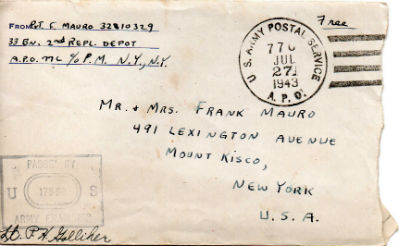 This letter is actually two separate letters, with different dates, in the same envelope. This letter is dated July 23, 1943, from Africa. It was in an envelope postmarked July 27 by the U.S. Army Postal Service.

To continue where I left off in my last letter…

I didn’t have room to tell you in my last letter, but I met Joe Pasquale, Lugi Conte and Steve, who ran the garage across the street, on the boat coming over. I was never so surprised in my life as when I saw them.

This is the craziest weather I’ve ever seen. In the daytime, it’s boiling hot, but at night, we freeze in our bed.

You should see these Africans here. Just as soon as we got off the boat and were walking to the railroad station, all the little kids asked us for chewing gum and cigarettes. They couldn’t speak English, but they could say a few words. All the young people shouted hello and goodbye to us and a few of the fellows who could speak French and Italian managed to talk a little with them.

The way these people dress is just like you see in the movies. They wear robes and turbans and a cross between a shirt and pants.

Last night we saw the first stage show held here in this camp. The camp is pretty new and isn’t yet half developed. The show was in the open air theatre. After the stage show, we saw a movie. The stage show was with an all-French cast and we couldn’t understand any of the songs they sung. They also had a woman magician here and she did the same tricks we saw a woman magician do in one of the service clubs at our last camp in God’s Country.

By the way, this open air theater is the best one I’ve seen in any army camp anywhere so far.

We changed our money here for invasion money. The invasion money is the same as ours only it has a gold seal on the bills where the blue seal is. We also got some foreign money. I am sending you some in this letter. It is a fifty franc bill and is worth one dollar in our money. Let me know if you get it.

If I stay in the this camp, I will get a pass to go into town and I will get a lot of souvenirs for you. I won’t be in this camp long enough to get more than one pass though.

The lieutenant told us a story today. He said when he was on the boat, they got a report from Germany or some place that said the ship he was standing on was sunk with everybody lost. There are a few men here who fought right here in North Africa. As a matter of fact, there was a terrific battle staged right at the location of this camp. We can still see the scars on the ground.

That’s about all I have to say for now, so I’ll say so-long.