Twenty years ago, on April 26, 1994, I wrote a letter to the National Personnel Records Center in suburban St. Louis. It was the first time I had requested information about Babe. At the time, I lived in Deerfield Beach, Fla., a suburb of Fort Lauderdale. Babe had been dead nearly 49 years. The archives division required a signed form by a surviving relative. That process further delayed my request, as I sent the appropriate form to my mother for her signature.

By October, I had resubmitted the request, with the proper form. In a note dated Jan. 12, 1995, with a notation written by hand, I learned that Babe’s “Army record has not been found; it apparently was a 1973 fire loss.” 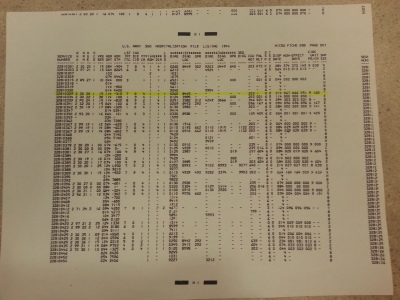 I live in the St. Louis area now. In the intervening years, the National Personnel Records Center has moved from its former location on Page Avenue to a larger facility just off of Interstate 270 in the suburb of Spanish Lake. It has also generated some news headlines for its efforts to reconstruct military personnel files lost in the 1973 fire in the old location.

So I visited the records center on Friday. Babe’s records are now old enough that permission from a surviving relative isn’t necessary; they are considered “archival” records. But there wasn’t much to see. The file mostly contained my correspondence from 20 years ago.

But there was some new information about Babe’s war injury, reconstructed from a source called the “Hospital Admission Card Files,” which were originally compiled by the Office of the Surgeon General during World War II and the Korean War, and are now in the hands of the National Archives.

Here is what I now know as a result of seeing this information:

Beyond that, I didn’t learn much. The experience was worthwhile. Once you’ve made an appointment at the records center, you arrive 15 minutes early, pass through a security checkpoint, register and review a brief PowerPoint presentation about how to handle the records. You’re not allowed to carry notebooks or pens into the records review room, although a laptop, a portable flatbed scanner and a silenced cellphone are allowed. It’s clear that they take the sanctity of the records very seriously, and they take precautions against allowing them to walk off.