By this point in the timeline of Babe’s letters, his unit should be based at Caserta, Italy. I’ve mapped the location of Caserta in an earlier post. I bring it up here because I recently came across some information that I thought was interesting, and the way I learned about it was fascinating to me as well. It also told me a little something about what Babe might have seen in his odyssey through Italy.

This picture was provided by Pia Conte, whose father Luca George Conte, also served in the army in Italy and was involved as the Fifth Army marched north from Naples and Salerno. 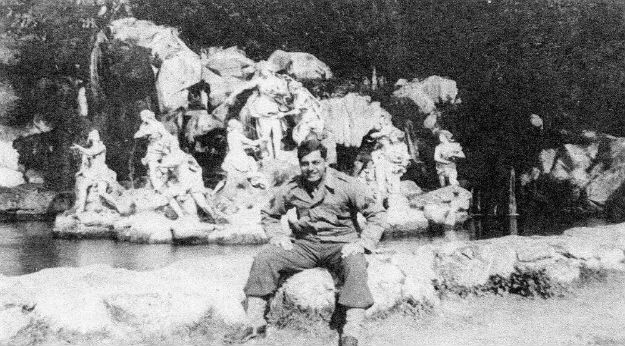 Pia Conte gave me no details about the photo, but my friends on Facebook helped me track down the location.

It’s a portion of the Diana and Actaeon Fountain at the Palace of Caserta. This is a photo of the entire fountain. Note the details to the right side of the frame.

The United Nations Educational, Scientific and Cultural Organization website has this description of the origins of the massive palace and surrounding grounds:

In 1734 Charles III, son of Philip V, became King of Naples, a self-governing kingdom that was no longer part of the Spanish realm. He decided in 1750 to build a new royal palace, to rival the Palace of Versailles. It was designed to be the centre of a new town that would compete with leading European cities. He employed architect Luigi Vanvitelli, then engaged in the restoration o St Peter’s in Rome. The Bosco di San Silvestro, on the two hills of Montemaiuolo and Montebriano, was covered with vineyards and orchards when in 1773 Ferdinand IV decided to enclose it and create a hunting park.

Wikipedia bothers to note, by the way, that the palace stood in for some of the regal scenes of Queen Amidala’s palace in Star Wars, Episode I: The Phantom Menance.

Knowing that Luca Conte was there during his time in Caserta, and knowing that Babe was in Caserta at some point during his World War II service, I have to wonder whether Babe also got a chance to see this palace. One would think he would have mentioned it at some point and, so far, he hasn’t. But who knows?

Apparently, it’s not out of the realm of possibility. Babe’s infantry division, the 34th “Red Bull” division, was part of the Fifth Army. And according to a University of Maryland research page:

In World War II the Caserta Palace was taken over (in late 1943) by the U.S. Fifth Army under the Command of Lt. General Mark Clark and became the Allied Headquarters in Italy until the end of hostilities in May, 1945. It was here on April 29, 1944, that all Fascist Italian forces (of Mussolini’s residual Italian Social Republic state) surrendered and where, on May 1, all German forces in Italy signed an unconditional surrender.

As I mentioned earlier, I also loved how I was able to learn more about this scene. Pia Conte had sent me the photo, with no details or comment. It was more about sharing a photo of her father from his service in the war. I posted it on Facebook, asking my friends if they could identify the location based on the statues in the background (my attempts to find it with simple Google searches struck out). Turns out, my friend Rose Boccio Anderson asked her mother, who zeroed in on it. I posted the photo Jan. 28; by Feb. 8, I had the answer. Isn’t that cool?