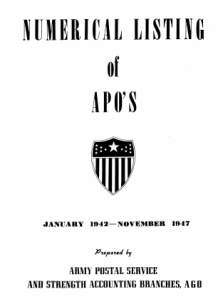 From my earlier post, written by Dave Kent of the Military Postal History Society, I learned that Army Post Office numbers, or APOs, are an effective means of tracking the location of a military unit. I expect to learn more going forward about how specific that information will become.

I recently corresponded with Richard V. Horrell, who runs WW 2 Connections and lists his home in Nashville. His website says he uses his passion for World War II history to create profiles of military personnel that he “researches and creates for his clients. His clients share with him the desire to remember what these men and women did for us 60 years ago.” I came across him through AllExperts.com.

Horrell responded to my questions about how to track APO numbers, which appear in the return address of all Babe’s letters. He responded on one of the APO numbers, but I realized Babe’s APO changes a few times, so I went looking for a source. I stumbled on this blog post from someone doing genealogical research, with a link to a PDF called “Numerical Listing of APOs, January 1942 to November 1947. It seemed like what I was looking for. I have it available on my site here.  (While trying to validate its authenticity, I found it apparently listed in a Smithsonian Institution index).

The last of Babe’s letters to appear on this site, for example, lists his APO as 776. With the document I’ve found, I don’t know a lot about that unit’s whereabouts, but I know this:

Babe’s last letter with that APO number was July 27, 1943, however, so that unit moved on without him. I know that he arrived in North Africa, specifically in Casablanca, for this reason and several others that I’ll explore in the next post.