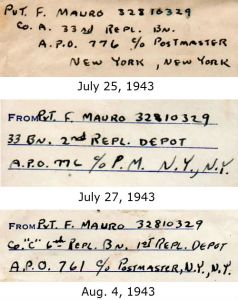 Piecing together the life of a soldier from his letters is substantially more difficult than I expected. I just don’t have access to the information, or the time it might take to find it. With what I have to work with, I am learning that I do little more than speculate.

For example, I’ve noticed that in Babe’s first few letters from North Africa, his return address changes three times. The first two may be the same, but rendered differently, but he moves from the “2nd Replacement Depot” to the “1st Replacement Depot” from one letter to the next.

A “replacement depot” was apparently a holding tank, essentially, for soldiers who came overseas and before they were assigned to a permanent unit. They were literally what they sound like: A holding depot for replacement soldiers. They were to replace the soldiers who were killed, captured or wounded.

One article on the subject of replacement depots doesn’t paint them in a very favorable light, calling the troops staged there “military orphans with little esprit de corps and no cohesion.”

The sole virtue of this system was that it allowed divisions to stay in near continuous combat for days on end, theoretically without eroding their numerical strength. As casualties left, replacements came in. However, the reality became that replacements came in, and with no combat experience and no one in their new unit looking out for them (the “I don’t know him and don’t want to know him, he’s only gonna be a casualty” syndrome), they quickly became casualties.

In Babe’s case, I feel fairly comfortable that I know his first stops once he left the United States. If you recall an earlier post referencing Luca Conte, it’s clear that Babe landed in North Africa at Casablanca, Morocco. Luca Conte told his family that’s where he landed, and he came over on the same boat as Babe. Additionally, we know that Babe’s first letter from overseas used APO 776 as his return address, and we know that on the day Babe arrived in North Africa, July 21, 1943, APO 776 was in Casablanca.

I don’t know how long Babe was in Casablanca, but it is likely his next stop was Oran, Algeria, for at least four reasons.

First Luca Conte told his son that he was flown from Casablanca to Oran; Lugi served in the Fifth Army. So, ultimately, did Babe (based on the Fifth Army patch I have).

Second, Babe’s letters make reference to the French currency I presume would have been around in French Algeria at the time. Still, that’s probably a large swath of property, so it’s hard to know more specifically. 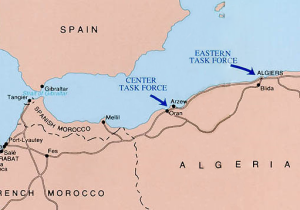 Third, I came across one reference to the “1st Replacement Depot” in an obituary online for Hugh Adams, a Kentuckian who died in 2005 and who served in World War II. According to the obituary, “he was called into the Army in 1942 at the age of 28 and was assigned to the 1st Replacement Depot in Oran, Algeria, North Africa.”

Fourth, one of Babe’s letters refers to “a terrific battle” staged on the site of his camp: “There are a few men here who fought right here in North Africa. As a matter of fact, there was a terrific battle staged right at the location of this camp. We can still see the scars on the ground.”

Oran was one of three beachheads for “Operation Torch,” when Allied Forced commanded by Gen. Dwight Eisenhower opened a southern front against the Axis in North Africa by overrunning Vichy French forces, capturing the position on Nov. 10, 1942. That was about eight months before Babe set foot in North Africa.

Was this the “terrific battle” of which Babe was speaking?